Intel announced in early May that it would be using “Tri-Gate” FETs to build microprocessors at the 22nm node. (See the previous EDA360 Insider post “3D Thursday: Intel and FinFETs (Tri-Gate transistors)—a different kind of 3D”). Intel’s Tri-Gate transistor structures closely resemble what the rest of the semiconductor industry calls “FinFETs” and I was fascinated by the topic while listening to a crystal-clear talk about FinFETs given last Friday at Cadence’s Building 10 auditorium by Chenming Hu, TSMC Distinguished Chair Professor of Microelectronics at University of California at Berkeley. Hu coined the term FinFET ten years ago when he and his team built the first FinFETs and described them in a 1999 IEDM paper. FinFETs combat short-channel leakage effects that are poisoning bulk planar FET (aka “the good old MOSFET”) performance in advanced-process technology nodes—which is why they’re getting so much attention right now—but there is a competitor to FinFETs called UTBSOI (Ultra Thin Body Silicon on Insulator). Hu’s team developed the first UTBSOI FETs under the same 1996 DARPA contract that funded the first FinFET developments. For more of the story, read on.

This wasn’t Hu’s first FinFET talk at Cadence. He spoke about the topic two years ago but at that time it was an unknown technology he said. Intel’s Tri-Gate announcement six weeks ago raised the new FET technology from obscurity and placed it on center stage. Intel is moving to the 3D gate structure of Tri-Gate FETs because good old MOSFETs are becoming harder and harder to scale now that we’ve achieved double-digit nanometer geometries.

It’s not that we can’t scale the FETs at these smallest process nodes, said Hu. We can, but there are just too many compromises. For example, Ioff (the off current) is too large. Vt, the FET threshold voltage, varies too much across a chip due to small variations in the gate length (Lg) and because dopant levels vary from transistor to transistor across a chip. When geometries as small, all you get are a handful of dopant atoms per transistor so even one dopant atom more or less creates parametric variations. The only way to overcome this variation is overdesign. Combating all of these problems increases design costs and forces Silicon Realization teams to run their designs with higher Vdd (to compensate for Vt variation), which drives up power consumption.

Perhaps the biggest problem is that the MOSFET becomes more and more like a resistor than a switch as gate lengths shrink. At small geometries, the FET drain competes with the gate to control the channel barrier so the gate becomes a much less effective control element. This effect is an exponential function of channel length, so it gets much worse, much faster as we continue to follow Moore’s Law. The classic fix to this problem for many years has been to make the gate oxide thinner and thinner to improve the gate’s electrostatic coupling to the FET channel. Eventually, the conventional silicon oxide barrier used for decades got so thin (measured in a mere handful of atomic layers) that we were forced to use High-K dielectrics to buy back some oxide thickness.

But as the channel length continues to shrink, there’s not much more to be done by fiddling with the gate insulator. Even if we could invent the perfect oxide barrier that was infinitely thin with the “perfect” dielectric constant, it would not be enough said Hu. That’s because the poison runs deep under the channel surface. It’s not up close to the gate. The problem’s in the silicon deeper in the channel. That’s the silicon that’s physically closer to the drain than the gate. There’s a lot of that relatively deep, leaky silicon when the channel is short, said Hu, and the only way to cure the leakage current is to make that silicon disappear.

That was the cure that DARPA sought way back in 1996 when it issued a call for proposals to combat this foreseeable problem. Under that contract, Hu’s team developed two approaches to combating short-channel leakage. The first was the FinFET, which uses a 3D gate structure to make’s the FET gate much more effective by wrapping it around three sides of the channel instead of just one side. To do this, the FinFET’s channel is actually a raised structure—a fin. It no longer sits within the plane of the IC substrate. 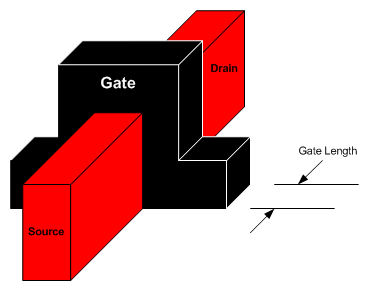 The second way to trim the excess silicon from the channel is to fabricate the channel using an ultra-thin layer of silicon that sits on top of an insulator. Hu’s team built that structure too, under the same 1996 DARPA contract, and dubbed it UTBSOI (Ultra Thin Body Silcon on Insulator). The UTBSOI MOSFET simply has no deep silicon for the drain to affect. It’s been eliminated by using the thin silicon film to build the channel.

However, to build this sort of FET, you need a way to fabricate SOI wafers with a very thin layer of silicon on top and that thin layer must have a very consistent thickness. “To within 0.5nm” said Hu.

Because the same team built both candidates for future FETs, Hu is able to speak about the advantages and disadvantages of each in a pretty objective way. For FinFETs, it turns out that the most important feature is the fin thickness, which needs to be smaller than or equal to the gate length. Transistor scaling no longer depends on oxide thickness, which is a very good thing because it’s the process lithography than now defines the FET characteristics at each new process node.

Further, said Hu, it only takes one extra mask to create the silicon fin. The FinFET manufacturing process is entirely compatible with contemporary advanced CMOS manufacturing and production techniques. No new magic required. After the fin is constructed, the rest of the processing is essentially planar because the fin just isn’t that tall. Fin height is on the order of 30nm for a fin that’s 20nm thick. After that, said Hu, it’s easy to scale the FETs. Just make the fin thinner and everything else just sort of falls out.

How thin can the FinFET fins get? Hu noted that a university team at KAIST (Korea Advanced Institute of Science and Technology) successfully built 3nm FinFETs using e-beam lithography five years ago in 2006. (I actually wrote about this achievement in the preface to chapter 15 of my book “Designing SOCs with Configured Cores” back in 2006.) However, making one such FinFET is a far cry from production noted Hu. Even so, Hu predicted that Intel would be able to push its Tri-Gate technology below 10nm.

Tomorrow, EDA360 Insider will conclude the discussion of Professor Chenming Hu’s FinFet talk at Cadence with more details about UTBSOI.