Last week at the Hot Chips 23 conference held at Stanford, Willow Garage President and CEO Steve Cousins gave attendees a 1-hour taste for the difficulties associated with designing autonomous robots that can freely interact with people without hurting them. Despite the amazing things a Willow Garage PR2 robot can already do—like play pool and make pancakes—there are still many, many things the robot cannot do well. For example, getting the robot to roll out on stage during the keynote proved far more difficult than you might expect. Watch:

As Cousins explained, robotics is not yet a large enough market to support the development of robot-specific sensors so Willow Garage and other robotics pioneers make do with sensors developed for other markets. For example, the “beak” that you see moving up and down where the PR2 robot’s “mouth” might be expected is a low-cost laser scanner developed for the garage-door industry. Lately, PR2 robots have been wearing Microsoft Kinect 3D spatial sensors as “hats” because there’s an incredible amount of technology packed into this device that sells for less than $150 in unit quantities. The Microsoft Kinect, said Cousins, is an excellent 3D spatial mapper at “couch” distances but anything farther away than about six to eight feet merely registers as “far away.” Here’s a photo of the PR2 at the Hot Chips 23 conference showing these sensors. 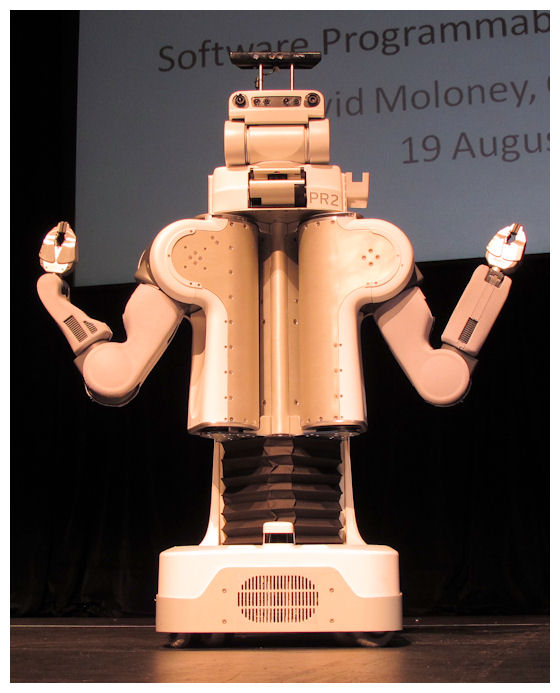 Robots also need a lot of distributed processing as it turns out. Local sensor processors for touch and local actuator processors for motors would be extremely helpful said Cousins. He also needs a robust power/signaling standard that will work through slip rings so that the signals can make it all the way to a gripper, for example. FireWire has no chance, he said. USB is OK and Ethernet works great through the intermittent connection of a slip ring.