Learn the secrets of taming the GPU—free—next Tuesday, September 13 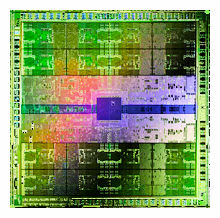 Next Tuesday evening in San Jose, Michael Shebanow will give a talk titled “GPU computing: Taming a 23,000 Thread Beast!” Shebanow is a principal research scientist at NVIDIA and he’s got a lot of processor architectures under his belt—the 32-bit and 64-bit x86, SPARC v9, the Motorola 68,000, and the Motorola 88000—so he’s quite familiar with processor architectures and how to get the most computing bandwidth from them. Now he’s working on GPUs at NVIDIA, developing next-generation graphics and unified GPU programming models.

GPUs started out as auxiliary graphics engines for PC and workstation processors. Then someone realized there was a lot of computing power over there in the graphics subsystem that might be put to other uses. At that point, GPUs started to transform into personal supercomputers. Shebanow’s talk will provide a brief history of this evolution and will then focus on the future challenges that await people who would harness this power beyond today’s game-centric sphere.

This talk is one of a series of free lectures sponsored by the Silicon Valley Chapter of the IEEE Computer Society. It will take place on Tuesday, September 13 in the Cadence Building 10 auditorium at 2655 Seely Ave (entrance is at the intersection of Montague and Trimble. The talk starts at 7. Pizza starts at 6:30. The talk is free but there’s a $2 donation request for the pizza (all you care to eat) and soft drink.

2 Responses to Learn the secrets of taming the GPU—free—next Tuesday, September 13