Like painting, prep work is critical in PCB design and one of the most important parts of that prep work is to develop footprints for all of the components on the board before starting the overall design. Generally, an experienced PCB design team keeps a library of commonly used footprints but those design engineers always seem to want one or two of those fancy new components, which then need new footprint patterns for the PCB layout. The objective is to get those multilayer patterns designed as quickly and as accurately as possible, which is a challenge for new components with hundreds or thousands of leads. EMA Design Automation has just announced a new $999 app called FootprintGen for the Cadence Allegro and OrCAD PCB design tools that achieves this objective through calculators that permit fast batch modification of existing patterns. 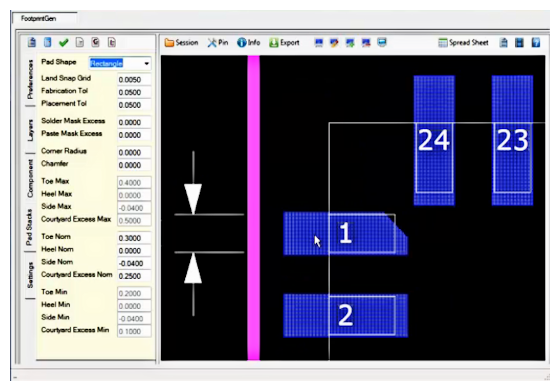 FootprintGen is now available in the OrCAD Capture Markeplace.

EDA360 Evangelist and Marketing Director at Cadence Design Systems (blog at https://eda360insider.wordpress.com/)
View all posts by sleibson2 →
This entry was posted in pcb, System Realization and tagged Cadence Allegro, OrCAD, Printed circuit board. Bookmark the permalink.